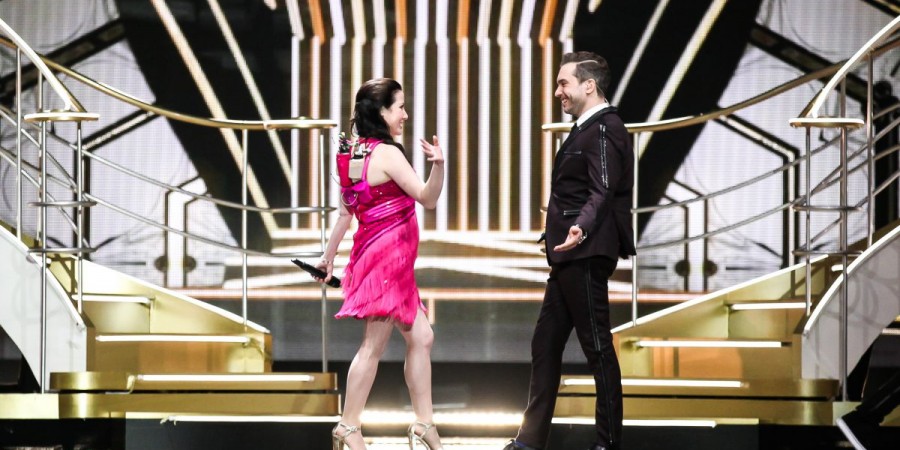 Usually two out for three ain’t bad. At Eurovision, United Kingdom fans would be glad for one out of three. The problem is that the strong song and strong act are washed away by the poor staging.

Everything had been moving towards a good song. A strong stand-out entry, excellent vocalists with growing stage presence, a solid Eurovision promo tour, a well produced promo video prepared in advance and record United Kingdom Eurovision YouTube viewing numbers all pointed to very good score potential. But hopes of success drained as soon as the first camera view of the stage came through on the screens.

I’ve explained my views in full on ESC Buzz today. It comes down to a fundamental lack of understanding of what the Eurovision Song Contest actually is. Treating an interactive 3D televised music competition as a live music concert removes all creativity and story-telling potential.

People want drama to bring the music to life. You can stand on a box and win with creative staging and a good song. Conchita did it last year. You can deliver a song standing still with a guitar using a single camera or sitting on stage with an effective background. See results for The Common Linnets in 2014 and Emmielle de Forest’s win for Denmark in 2013.

Lack of attention to detail is also an issue as is the production timetable and connection of all the various parts such as song, costume, staging, backing images and on-stage props. 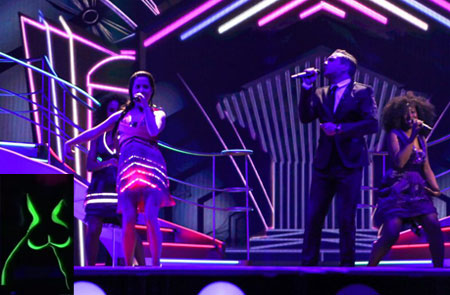 Costume Malfunctions made matters worse. Alex’s costume did not light up, Bianca was beset by a poorly placed microphone pack and what looked like pyrotechnics strapped to the back of her neck. The most embarrassing was the moment she appeared to be transformed into a diagram for a debated biology syllabus class – complete with ‘follow the arrow marks. The inset shows how Austria used the same idea in 2012, failing to get off the starting line in the semi final, finishing… you guessed it. Last. The idea had been marginally more successful in Sweden when Danny took second place behind Loreen – but he didn’t even get to Eurovision. It’s been done in several national finals over the last two years as well.

And the nightmare moment is the pinky light position on the lower front of her dress. It’s a costume malfunction in a very literal sense.

Read more about my in depth analysis of the BBC’s lack of understanding and troubles of the first United Kingdom Eurovision Song Contest rehearsal on ESC Buzz here.

Read what I wrote for Metro online below.

The United Kingdom is in serious danger of another ‘Nul Points’ at this year’s Eurovision Song Contest – that’s the overwhelming view of journalists from across Europe who almost unanimously believe this morning’s first rehearsal of Electro Velvet’s ‘Still in love with you’ is by far the weakest staged entry on the Vienna stage this year.

The quirky song has been seen as the best in recent years to represent the United Kingdom at the Eurovision Song Contest. There is nothing wrong with the song and there is nothing more the singers can do to deliver it better. – Alex Larke and Bianca Nicholls put their heart and soul into the vocals. They are simply not the problem.

Neither is the backing screen an issue. The stage is surrounded in typical 1920s decorations that you might expect to see at the London Hippodrome or the leading West End clubs at the time of the Charleston’s popularity.

The stage props see a pair of staircases that the singers start on and walk down. It mirrors the Café de Paris venue or the traditional Oscars steps. From above it looks like another pair of shoes thrown across the stage (see Czech Republic performance). It’s almost like someone thought, well we sent Jade Ewan down some stairs in Russia and got fifth place so lets double up on that idea’. What worked in Russia seems out-dated and distinctly underwhelming in a year where staging has become so strong.

Poor Bianca is wearing her microphone pack below the back of her neck, next to either a battery back, or potentially a fireworks pack that we’ve yet to see work. That’s fine if there’s no camera shot from behind or the side – but there is. Several times. It looks terrible.

Then there’s the neon glowing lines on Bianca’s pink dress and the backing dancers’ outfits. This was tried in the Swedish final in 2012, and then in several national finals around Europe in 2013. For Eurovision 2015, it just doesn’t work.

The BBC promised something original on stage that would enhance the UK’s chances of victory at the 2015 Eurovision Song Contest. What they have delivered is less innovative than any of the other 40 entries. The problem only becomes more severe when many of the weaker songs are eliminated in the semi finals on Tuesday and Thursday night.

“You feel that The Chuckle Brothers could stage a better performance. The chaotic cutting and lack of narrative focus is in contrast to almost every other entry this year.”

This is in stark contrast to the Press Release put out by the BBC immediately after the rehearsal in Which Guy Freeman, Head of the UK delegation states:

Guy Freeman, Head of Delegation for the UK says: “The creative team behind the concept have been working exceptionally hard to ensure that the United Kingdom has a visually stunning and memorable performance on the night of the grand final and we can’t wait for the world to see it.”

The most depressing thing about today’s rehearsals is that the build-up to the final was so strong. The song hit number one on the UK physical sales chart and has received a decent amount of airplay on national radio. Alex and Bianca have taken Electro Velvet around Europe to Eurovision preview events and been received strongly. Their official promo video was strong and delivered early, giving a greater chance of success. But all that amounts to nothing if their three minutes on stage at the Eurovision Song Contest stage fails to live up to those standards. And it fails to live up to those standards.

There were hopes of using dancers on the backing screen to show some choreographed dancing – giving the performance more power than is ever possible from a maximum of six people on stage. It could be done. We know it could be done because in the very next rehearsal, we see the French solo songstress in a breath-taking stage production that shows how much though most other countries have put into their Eurovision entries.

Lisa Angell performing for France with four backing drummers leading an entire marching army. The impact is immediate. France were thought as a possible last place this morning. They are now being talked about as a potential for the top six.

This is a prime example of how the staging can take an average song and turn it into a contender. Unfortunately the BBC’s vision has taken what is a good Eurovision entry and turned it into something far less than average. 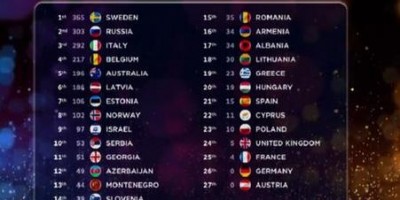